When I found out that my current lawn service did not mowed grass in my new neighborhood, I decided to call on a few people who have left cards or mailed pamphlets to my new house. One that caught my attention was Will’s Lawn Service. Will is a 15-year old 9th grader from the neighborhood, but according to his marketing piece he “has been on a lawn mower since I was 5 and have been cutting grass professionally for the past 3 years.” 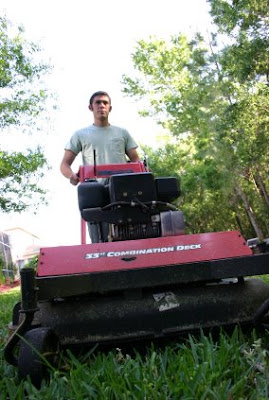 I called on 4 different people including Will. I talked with 3 people and left a message with the other, including my new address and needs; however, Will was the only one who called from the property with a price. He also offered to cut the grass right away. It’s been over a week now since my first round of calls, and I haven’t heard back from the other three people on a price. And, by the way, my yard is a respectable 1.2 acres.

Will did a great job cutting the grass and even got the stripes in the angle I requested. He asked me if he had the job moving forward. “Let me talk with Gwen, and I’ll get back with you by the end of the week,” I told him. The rest of the week was busy and I forgot all about Will. Friday afternoon my phone rang. Will was on the other line wanting to know if I had made my decision. I remember thinking, “this kid is going to do great in life,” as I talked with the 15 year old.

Here’s a few lessons business people need to learn from Will:

1. Don’t lie, but make your pitch interesting. How much experience can a young teenage have? Well, enough. You don’t have to embellish your resume to get the job. Take your perceived weakness and turn them into strengths. Will didn’t have a large crew, but he was nearby, his price was good and he could cut the grass on a Friday, which is my preferred date (in case you didn’t pick up on it, I’m a bit demanding). I loved his line: “I’ve been mowing professionally since I was 11.”

2. Seize the moment. Will called me back shortly after I left him a message. I know he was in school until 3 p.m. so he called minutes after he left class. When people want things done right away, often the first person to call back gets the job.

3. Do good work. Well, you’d think that’s assumed, but you’d be surprised on how many times people have done substandard work and wondered why I hadn’t called them back.

4. Follow up. Three days later, Will called me back to make sure he had the job. Instead of wondering why people have not called you back, follow up with them. I was just too busy to think about the grass until it needed to be cut again.

It’s easy to blame the economy, unreasonable people and our insane parents. But if we were to try just a bit harder, we’d be surprised of how much more we can accomplish. Now I’m trying to convince Will to hire my 14-year-old son, Marcus and take him on under his wings.

What lessons what you learned lately?

Share “How to Market Yourself: Lessons from a 15 yr Old Entrepreneur” by Maurilio Amorim