In business, you need to learn when and what you need to control. Figuring out this formula can be the difference between growth and stagnation. One day I came to the realization I was stifling the growth of my business because the very skill set that allowed me to get to a certain success level could not fuel the growth beyond that point. Even worse, I was having a difficult time attracting and keeping gifted and skilled professionals on my team. The wake up call came several years ago as I found myself in the ER with chest pains. 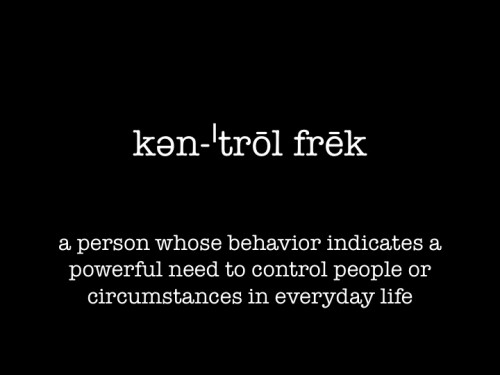 I like control. My family refers to me as “Captain Schedule” when we go on vacation. However, being a control freak has its advantages. After all, if you control everything, you can never blame others for a failed project, a bad hire, or even a flat soufflé. As an entrepreneur, I benefited in the early days of my company from having a good grasp on everything that was going on…from cash flow projections, to hard drive storage capacity, to the details for every project of every client.

While it doesn’t take a genius to figure out the reality that one person can deal with only  a limited number of moving parts, it’s extremely difficult for those of us who have a need to feel in control to step back and look at our own situation through an objective lens. Instead of changing the way we operate, the control freaks of the world try to figure out ways to be more productive, to sleep less, and to get more done than anyone else around us.

I still like control. It’s part of how I’m wired.  But today I have built a team of incredibly competent professionals whom I’m proud to work alongside. I strive to make the contribution that only I can make and stay out of their way, for the most part. Letting go has been difficult and I’ve made several mistakes along the way, but here’s what I’ve learned:

Hire slow. Fire fast. In order to give up control of anything that’s dear to you, including the very business that’s your livelihood, you must trust someone in three critical areas: competence, chemistry, and character. Never, ever compromise on these. I wrote more about the three “C”s as I call them here. But the moment you realize you made a mistake, take care of it quickly. Nothing erodes an organization’s morale and performance faster than a disgruntled or incompetent team member.

Byte size ownership. One of my early mistakes was to dump too much too soon on a new hire. That’s not fair to them, nor to the entire organization. Start small, correct the mistakes, celebrate the victories, and move forward to bigger and better things. Building trust is a process, and one you cannot short change.

Don’t abdicate your responsibility. Know what you must know. As a leader, I must not relinquish the responsibility for the organization’s well being, including financial, directional, as well as operational. While I might not be deep in the details, I must have a solid grasp of these essentials. “I did not know things were this bad,” is not an indictment on an organization, but on its leader.

Motivate. Do not control. Control is an illusive drug. Controlling people is not only wrong. It’s downright impossible. I prefer to motivate people and find ways to resource them with tools that will make them want to do their best. Highly motivated, talented people don’t need to be micromanaged, or coerced into better performance. They have an inner drive that needs to be guided, nurtured, and deployed. If you are having to stay after someone for them to perform, you have hired poorly.

Are you a control freak or do you just go with the flow?

Share “In Business, In Order to Grow You Must Give Up Control” by Maurilio Amorim