While the adults at my delayed gate in Atlanta looked around frustrated, tapped their toes, and checked their watches often, a group of small children decided to take a different approach to the inconvenience. I like their approach better. 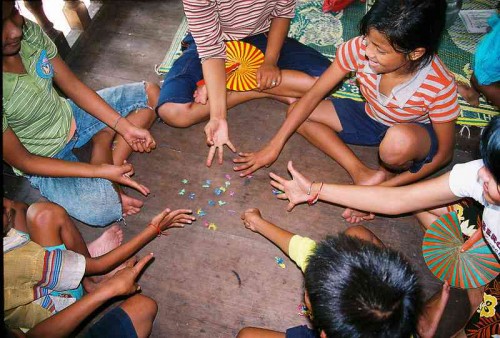 It was a typical scene in most busy airports in America: people trying to get to their final destinations, hoping that their delayed flight would not derail their best laid plans. I had joined the rest of the self-important business travelers whose body language clearly displayed our discontent with the situation. During my time at the gate, I saw a few small children finding each other and impromptuly forming a circle on the floor. Then they began to play games, and by the time we were boarding, they were breaking into song. Our delay became their party.

As I was boarding I looked at the children and could not help but smile. I noticed a lady next to me smiling as well. The thought then crossed my mind: at what point in my “development” did I lose the ability to find the fun and excitement in the most of mundane, if not, inconvenient, of situations? At what point of maturity did life become a series of tasks and appointments where I lost the opportunity to make new friends and smile?

Years ago my flight to Rio was diverted to Bogota, Columbia due to engine issues. Our entire 747 was stranded at the airport. We could not even leave the plane due to obscure reasons I do not recall. Word came that we would have to stay at least another 6 hours waiting for the problem to be fixed before we could leave. People were mad, hungry, despondent–the typical traveling reaction to such an ordeal.

After a make-shift dinner of airport food fare, we found ourselves sitting back at the plane grumbling about our misfortune. During this time I discovered that the young couple sitting next to me was college students like myself, but they were also opera singers and quite accomplished for their age. “Why don’t you sing for us?” I proposed. They looked puzzled at first then shrugged their shoulders and agreed.

What happened next was pure fun. My new friends broke into an aria right from their seats. They stood up and began to sing from the top of their lungs. It was just beautiful. The whole plane got quiet, and as they finished the first song, the place erupted in spontaneous applause. For the next several minutes they went through most of their repertoire. Once they were done, I stood up and asked if anyone else would like to sing, or “share a talent” with the rest of the plane.

What started as a terrible delay in an airport where soldiers carried machine guns around the concourse turned out to be one of the most memorable moments of my life. It’s been almost 30 years since then, and I can still remember it vividly.

What would happen if we were not always so “grown up” and found a way to turn the inconveniences of life into opportunities to engage and enjoy people around us?  I think the airport children were right. They found a party where we found a headache.

Share “A Different Approach to Inconvinience” by Maurilio Amorim