Sometimes intelligent people surprise me with their lack of business acumen, marketing savvy and just even common sense. A Pastor friend of mine had been in dialogue with a service provider who came highly recommended to him. According to his sources, this business owner went to an Ivy League school and was running a service business helping Pastors with their message research. Negotiations were going well until my friend received the following text message: 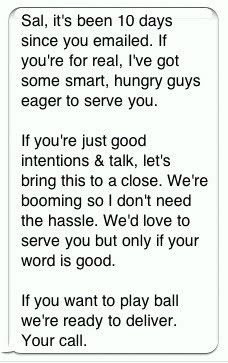 First I thought it was a joke, but he assured me this was for real. He didn’t know what to say in reply but he knew he was not going to do business with the man for sure– Ivy League pedigree or not.

Am I overly sensitive or is this one of the worst attempts at closing a deal you’ve ever seen?