It almost pulled my bad shoulder out of socket and it pinned my right arm next to my right ear as I desperately tried pulling down the powerful compression Spanx undershirt that was cutting the blood circulation to my head. I panicked because I was alone at home and the only thought that came to my mind was a horrifying one, “I can’t die with spandex wrapped around my neck. How would Gwen ever explain that?” As the room began to grow darker because of the lack of blood flowing to my brain, I made one more desperate tug downward and got the t-shirt half-way down my chest. I sat down on my bed and rested a few seconds before the second half of my compression undergarment battle. 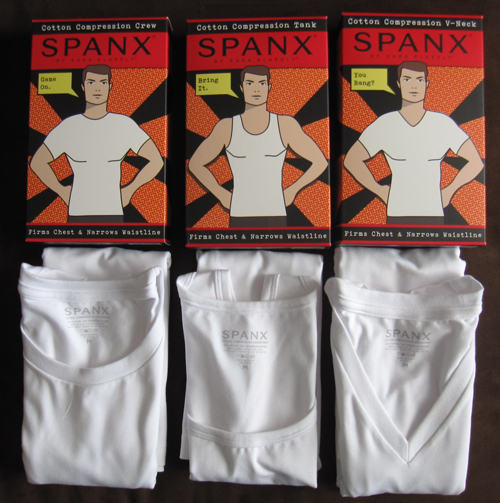 Spanx for men is a big hit these days. For centuries women have donned girdles, corsets and many other variations of undergarments, or as we call them now, “shapewear.” Through the miracle of spandex and elastane, the underwear industry has squeezed women into better looking legs, waist and, yes, breasts. Recently, Spanx, a 12-year old company that has had the corner on women’s shapewear launched a full men’s line. Men immediately flocked to it creating a 6-week back order ordeal in both high-end retail stores as well as online. The company obviously underestimated the market demand. My business partners, Tami Heim and Shannon Litton asked me to write a Fashion Friday post about it. Well, I couldn’t do it without trying the darn thing on. After a near-death encounter trying to get dressed, I thought I was not going to be able to wear it, but my body adjusted quickly, and I felt immediately trimmer. 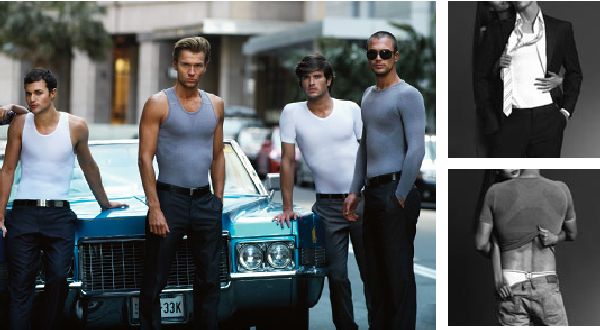 The makers of these “extreme compression” under garments don’t make any big claims: while you will not get six-pack abs by wearing your Spanx shirt, you might look 5 lbs smaller and be able to tighten your belt one more hole. Well, that’s enough for a lot of men to pay anywhere from $55 to $80 for one of these shirts.

There are two main categories of guys buying shape wear: really fit men who want to show off their hard work by just wearing the undershirts with pants in public and overweight guys who want to get rid of love handles, bulges and moobs (aka man boobs).

I tried on the grey sleeves tank version under a tight casual shirt and I must say that while I did not need the extra compression to flatten my stomach, I did like the way it helped me keep a better posture by helping me sit up straight and keep erect without slouching, which is something I have always struggled with. Amazingly, the few extra pounds I have been trying to get rid of were forced to go somewhere else. I’m not sure where, but who cares?  Another unintended benefit is that I could only eat small portions of foods since my stomach had no room to grow, literally. 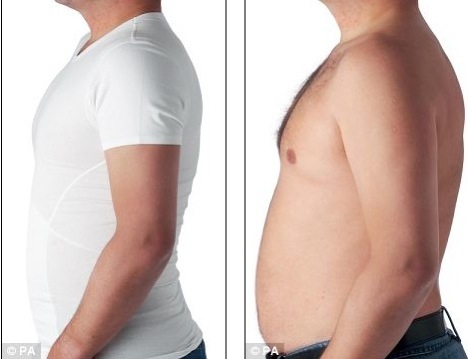 It’s not all fun and games however. Since my undershirt was sleeveless, it only had a narrow band of material connecting the front and back. Hour 6 of my day I could feel a furrow being created on both shoulders.  When I tried pulling it up, it would snap back making the furrow deeper and causing suspicious looks from those nearby.

I forgot I had it on and went to see my Chiropractor that afternoon.  As he tried to gain access to my back and couldn’t muscle the powerful sausage casing from my body, he yelled out for everyone to hear: “What the heck are you wearing? Is this a girdle?” “Uh, no. It’s called “compression wear” I retorted and quickly asked him a question to get off subject.

Women have suffered for beauty for a long, long time. It seems like guys are willing to be squeezed a little in order to enjoy a few more 5 Guys Burgers.

Guys, would you wear a Spanx if it took care of your gut, love handles or unsightly bulges? Ladies, would your man wear one?