This is not a cooking blog, but I love to cook and several people asked for the recipe once I tweeted about it. Plain tomato soup can be thin and sharp. Adding cream—the usual stodgy solution—merely dulls it. I wanted to tame the tartness without losing flavor. I found this recipe in Cooks Illustrated. You have to be a member to get it, so I’m posting it here for you. 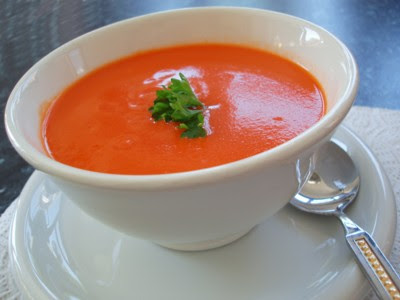 Too many versions of tomato soup either feature an acidic, watery broth or an overdose of cream. Though it’s meant to tame tartness and lend body, adding cream goes hand-in-hand with muting flavor.
The Goal

we wanted a tomato soup with good looks, velvety smoothness, and a bright, tomatoey taste. And we wanted it without the cream.

First, we chose canned tomatoes—they’re almost always better than the average supermarket tomatoes plus they’re already peeled. To begin brightening the flavor, I swapped out the butter used to sauté our onion and garlic base for olive oil, finding that milk solids in the butter tamped down the tomato flavor (much as cream does). A bay leaf and a pinch of red pepper flakes also upped flavor. We added the vegetables to the tomatoes and a can of chicken broth, then added a touch more oil and a couple tablespoons of brandy before pureeing the soup in the blender. But we still needed to address tartness and thinness. A little brown sugar toned down the bite, and we were pleasantly surprised when we added an ingredient suggested by classic Spanish gazpacho: bread. Not only did bread further temper the acidity, but it also served as a thickener. However, adding bread required us to reorder our procedure since we needed to limit the amount of liquid in the blender to prevent ending up with bread chunks swimming in a sea of broth. It was simple enough to puree the tomatoes with the aromatics and bread before adding to the pan along with the broth.If half of the soup fills your blender by more than two-thirds, process the soup in three batches. You can also use an immersion blender to process the soup directly in the pot. For an even smoother soup, pass the pureed mixture through a fine-mesh strainer before stirring in the chicken broth in step 2. Serve this soup with Grilled Cheese Sandwiches for a Crowd or topped with Butter Croutons.

1. Heat 2 tablespoons oil in Dutch oven over medium-high heat until shimmering. Add onion, garlic, red pepper flakes (if using), and bay leaf. Cook, stirring frequently, until onion is translucent, 3 to 5 minutes. Stir in tomatoes and their juice. Using potato masher, mash until no pieces bigger than 2 inches remain. Stir in sugar and bread; bring soup to boil. Reduce heat to medium and cook, stirring occasionally, until bread is completely saturated and starts to break down, about 5 minutes. Remove and discard bay leaf.

2. Transfer half of soup to blender. Add 1 tablespoon oil and process until soup is smooth and creamy, 2 to 3 minutes. Transfer to large bowl and repeat with remaining soup and oil. Rinse out Dutch oven and return soup to pot. Stir in chicken broth and brandy (if using). Return soup to boil and season to taste with salt and pepper. Serve soup in individual bowls. Sprinkle each portion with pepper and chives and drizzle with olive oil.

This is a winner: rich in flavor and texture but low in calories and fat.