I miss my dad today. Monday I left him in Florida at my sister’s house while my family and I drove back to Tennessee. He stood at the front porch fighting the inevitable tears. Being close to my father, Senhor Maurilio, as he is known in Brazil, is something very new to me.

Growing up I respected my father, but I mostly feared his occasional outbursts of violence. Even though there were not often, these incidents left very powerful and negative impressions on me. I also remember my father always nursing headaches that prevented him from any meaningful exchange with me or my siblings. 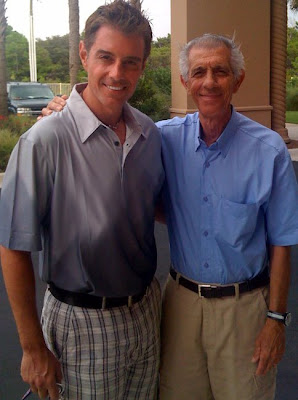 But God and time have a way to heal wounds and change people. In the last 25 years that I’ve lived in the US my father has changed into a kind, low-maintenance and fun man. Three weeks ago he came from Brazil by himself without knowing how to speak any English. My mother did not want to come, and she “released” him to come alone. He called her bluff and came anyway.

The first conversation we had as he arrived at the airport was about his to-do list around my house. Senhor Maurilio is a fixer, and he has to have a series of projects to keep him busy: painting, electrical work, cleaning, whatever. So, during the last three weeks I have made more trips to Home Depot–aka Nirvana, heaven, paradise–than all of last year. As we reconnected, I found out that the man only required two things to be completely happy: a hamburger and a trip to Home Depot. After his recent discover of Arby’s, he commented that “every place is better than the other. Wow, Americans know how to cook hamburgers.” “Yes, dad, but wait until we get to the beach and you see what happens when people eat too many of them,” I said trying to shatter his new-found American dream.

The time I spent with him in the past 20 days has been the most valuable of my entire life. There was no cathartic moment when I confronted him with all my young, unsettled angst and he responded by repenting and weeping openly. I think that only happens in bad Christian movies anyway. But I got to spend time with him, hear about the faith he developed since I left home as a teenager, and just hang out with my father. Fortunate for both of us, this was the first time we didn’t have to manage my mother’s emotions and try to relate to each other around her constant commentary (mom deserves her own blog post–well posts, many, many posts.)


There was no cathartic moment when I confronted him with all my young, unsettled angst and he responded by repenting and weeping openly.

Last week I came home to find the 71-year-old Senhor Maurilio 10 feet above ground on the porch railing trying to paint the ceiling. When I asked him to get down and not do it again, he was quick to report that he “was still able to climb trees.” “Great dad, you’re in America now. Here that’s called a liability. We pay illegal immigrants to climb for us,” I informed him.

I took him with me on a golf outing while on vacation. I was fortunate not to play with a group–just the two of us went out. Thinking about it, the other guys who were supposed to be in our group were the fortunate ones. Dad and I spoke fast and loud Portuguese and laughed the whole time I played as he tried to “coach” me on my every move. “No dad, 6 points on a par 3 is not good.”

In the past 20 days I ate enough cheeseburgers to shorten my life by at least 15 years, but I gain something I never thought I would find: a relationship with Senhor Maurilio. I didn’t know how much I craved it and how much I needed it until I started to drive away and saw him standing alone on that front porch. My eyes filled up, my throat tightened and for the first time I can remember, I knew I was going to miss my dad.

Share “The Father I Never Knew” by Maurilio Amorim