Lately I have become an unwilling member of the emergency room frequent guest program. Six weeks ago I spend the better part of an afternoon at ER of centennial hospital after finishing the Nashville Marathon. [I wrote about it here.] This past Saturday I returned to another ER, Williamson Medical Center, with my youngest son, Derek, after he got a small gash on the top of his head during a “friendly sword fight” (official version by his older brother, Marcus). The swords in question were not real swords but hockey sticks that doubled as ninja weapons. However, the whole incident was not as traumatic to the family, including the busted boy, as was our trip to the ER. No wonder our health care system is in such a crisis. 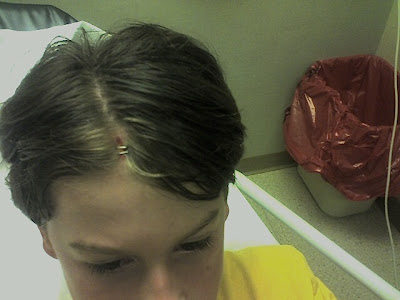 Since the cut happened Saturday afternoon, we called the pediatrician’s office to see if we could get the physician on weekend duty to examine the boy. To my surprise, here’s the recording I got: “You’ve reached Old Harding Pediatric, our offices are closed. If this is an emergency, call 911.” I guess we have two options, get sick from 9-5 or call 911. That’s crazy!

So we pack everyone on the SUV and head out to the ER. We walk to the lady behind the glass, and she takes our information and gives Derek his hospital bracelet immediately. Great, this thing seems to be moving fast, and since there’s only a couple of people sitting in the waiting area, I’m hoping to be headed to Cozymel for fajitas in no time. 10 minutes later we’re called in an examining room with a pleasant man. After examining Derek and ascertaining we didn’t beat him purposely on the head with a stick and tried to cover up with the sword fight story, he tells us that someone else would probably staple the boys wound together. “It’s pretty simple process” the man says. “Why can’t you do it?” I ask. “ I just do the exam,” he says and sends us back into the waiting room again. “You need to check in first,” he says.

After sitting down for a few minutes another woman calls my name into yet another room where I produce my insurance card, work information, home information, political views, past girlfriends list and whatever else she can think of. Then she sends me back to the waiting room to be reunited with my family. Derek is already sufficiently freaked about the whole staples-on-his-head idea. I try to console him with my cheerful “isn’t that the coolest? You’re getting staples!” He doesn’t bite. He looks up at me with disappointment at my lame attempt, sighs, rolls his eyes, shakes his head and laments “Oh please. You get them, then.”

Twenty minutes later we’re called in. This time another male nurse escorts us to an examining room where he looks at the wound and confirms the earlier treatment: staples, quick and easy. But he can’t do it. We have to wait for the nurse practitioner to do it. He tries to comfort the boy by telling him how simple and painless this will be once they do “a small, local shot that you won’t even feel.” Now the only thing Derek hears is “shot.” The kid really begins to freak out. He not only is getting his head stapled, but someone is going to give him a shot on the skull. Nice going, Mr. Smooth.

“Please, don’t tell him anymore information, just stapled the darn cut and let us go.” I say as patiently as I can. Ok, I was getting angry by then. He leaves. I’m scolded by Gwen for not being helpful.

For the next forty-five minutes we’re in a 4 feet by 8 feet treatment alcove with a bed and two chairs waiting for the official hospital “Stapler” show up. Gwen, Marcus and I kept moving around the two available chairs while Marcus whined: “I’m hungry. Can’t we get something to eat and then come back?” Meanwhile I’m being tortured by reruns of Hanna Montana and iCarly (if you don’t know what those are, thank God for your good fortune) on the Disney channel playing above our heads.

Suddenly, the Nurse Practitioner comes in. She takes a look and yes, confirms the treatment. “I think two staples would be the way to go.” But before I could rejoice, she breaks my spirit with “I’ll come back as soon as I finishing stitching the girl next door.” “O for the love, I should have stapled his head at home and we’re been done with this ordeal,” I say out loud. Stares all around. The Nurse looks shocked, Gwen looks embarrassed, Derek looks scared, and Marcus, well, he looks hungry and bored.

She leaves and we’re left alone again with the bad tv shows. After another 45 minutes, the male nurse apologetically returns and says they’ll be back soon. “You ticked her off with your smart comment,” says Gwen to me.

Finally, almost three hours since we got there, the Nurse and her nurse come in, spray some freezing deal on the boy’s head while we hold him down, gives him a couple of quick shots and then, clunk, clunk—two staples. That was it. The entire ordeal lasted less than 30 seconds. Really. We still had to wait another 15 minutes for whatever discharge papers needed to be finished.

3 hours, 4 different rooms, and 5 different people later we’re done. I’m not an efficiency expert, but there’s got to be a better way to do this. There’s got to be. And we wonder why our health care costs are out of control. Now we wait again. This time we wait to get the likely 5 thousand dollar bill from the ER visit, since we use so many of their resources. And the irony of it all, we never even saw a Physician.

Share “Another Trip to ER Hell: Why our Health Care Needs Reform” by Maurilio Amorim