Between worrying about the thunderstorms and getting up on time for the race, I was a restless man Friday night. But as 4:00 AM came on Saturday, I was up and getting ready for the longest, biggest race of my life. After all, the longest race I’d run before yesterday was the Boulevard Bolt–a five-mile run on Belle Meade Boulevard every Thanksgiving morning. To make things more interesting, six weeks ago, I had developed Achilles Tendonitis on my left foot and was told I might not be able to run at all. But after physical therapy, a slower training pace, I felt ready to go.

My running team, Innerstrength, met under the pavilion at Centennial Park at 6 am for stretching, tattoos, group pictures and a pep talk from head coach Matt Royka. Lining up at West End Avenue with 30 thousand people was an awesome sight to see. It’s funny how your heart rate goes up before a race due to the anticipation and excitement of “doing it for real” this time. All of the hours of training, the long runs in rainy and cold weather were coming to bear in this one race. How exciting. 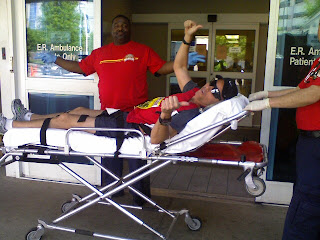 As the gun went off and my corral was let go, (ok, can we come up with a better term than “corral?” come on, where are the marketing people?) I was prepared to have a great time. And boy, I did. I’ve never seen so many people lining up the streets of Nashville before encouraging and cheering us on. The performing stages were such a treat, and as I ran by Belmont Church, their Praise Band and Singers were kicking it into high gear with “Shout to the Lord.” It was awesome.

And so I went. Enjoying the bands, the volunteers who offered us drinks and the well wishers everywhere. I thought I could run like that forever. That was until mile 21. I’ve heard about hitting the proverbial wall, but until yesterday, I had never experienced it personally. It was the strangest feeling: I was moving along fine and suddenly my legs, feet and even forearms decided they just had enough. No warning, just plain rebellion. Cramps all around.

My friend Chantel Hobbs, had said to me the day before, “run the first half with your mind and the second with your heart.” Now I know what she meant by “heart.” The last five miles were an eternity. My pace dropped. I had to walk/run in order to stop my legs from cramping, but all I could think about was finishing the race. I got through the gates at 4 hours 31 seconds according to my watch and 4:34 according to the official chip time. I was hoping for 4:05, but I had made it. Somehow the race announcer managed to say my name as I crossed the finishing line. How cool was that? I got my photo finish, my honking medal, my 26.2 mile-run, Yeah.

As my running partner and I were headed to pick up our bags, I started feeling terribly. And once I sat down, and eventually laid down, I could not sit up again. My blood pressure would drop and my heart rate would spike when I tried sitting up again. My running partner, Tammy, our training coach, Anita, and a friendly young paramedic tried to help me out. All things considered, I did have three beautiful women doting on me–it could’ve been worse.

The paramedics decided that I was dehydrated and needed to be on an IV. A perilous trip to Centennial Hospital in the hands of a mad ambulance driver, three liters of fluid–that’s almost a gallon if you’re metric impaired–two blood tests and several hours later, I’m driving home in time to get ready for a final celebration with my team.

It was a long day, but one I’ll never forget. It was a rich experience for me. Here’s some of my lessons:

All of that in one day. What a day it was.

Share “Lessons from My First Marathon” by Maurilio Amorim