Yesterday I spent the morning interviewing college kids for a video project my company is working on in partnership with Living a Better Story Foundation, Belmont University and Donald Miller, the author. It was a culmination of a 21-day program where Belmont’s Sophomore class attended Don’s lecture a few weeks back. At the end of the lecture, students received an envelope with either 5, 10 or 20 dollars. They were asked not to spend the money on themselves but to pray first and then seek to help someone else with the money by the end of 21 days. I honestly didn’t know what we were going to hear, but I certainly didn’t expect what I got. 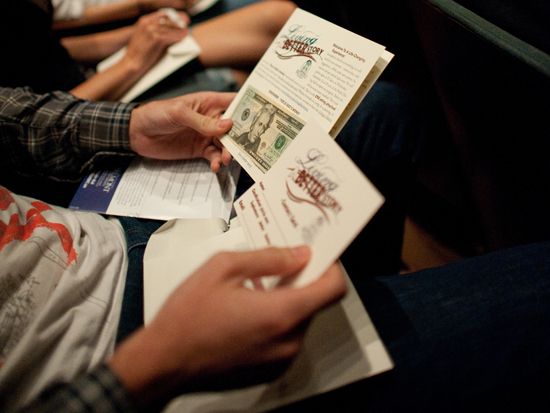 Interview after interview I heard stories of how prayer led to the realization that this “given” money was God’s. “But so is everything else I have,” said these students, “including what I thought was my money.” Those who “got it” were transformed. They multiplied their money, some hundreds, a few even thousands of dollars. Some bought goats, chickens, ducks, fishes, and seeds through the Samaritan’s Purse catalog that will help create sustainable lifestyle for families in developing countries, others created care packages for unwed mothers, some made and sold bracelets, cup cakes, and all sorts of goods, one kid even stocked piled Second Food Harvest with tons of canned goods. You can read some of their stories here. But their greatest lesson was learning to trust God with everything, including the little money they thought they had and in the process started living a better story. One that focused outwardly, maybe for the first time ever.

As I interviewed Dr. Bob Fisher, Belmont’s President, I asked him about the impetus of doing this program on campus. “It started with a question from one of our Trustees,” he said. “What are we doing to teach college kids to give, not only of their time, but also of their money?” Dr. Fisher didn’t have a good answer a year ago. He does today.

As parents, leaders, entrepreneurs and role models what should we be doing to impact a generation that has been described as over-indulgent? How can we help our children, students and employees to live a better story?

Share “How to Live a Better Story” by Maurilio Amorim